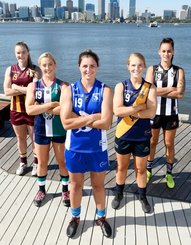 A new West Australian Football League Women’s (WAFLW) competition will kick off in 2019, with five teams to compete in the inaugural Optus WAFLW Premiership Season.

East Fremantle, Claremont, Peel Thunder, Subiaco and Swan Districts will each field a WAFLW team in 2019, with South Fremantle receiving a provisional license for 2020.

West Australian Football Commission CEO Gavin Taylor said the WAFLW competition was an exciting step forward for football in WA that would complete the talent development pathway from Auskick to AFLW.

“Club Football participation by females has tripled in WA in the last five years to more than 94,000 and it is important that every one of these players has the opportunity to reach their full potential and compete at the highest possible level,” he said.

“Whether it is playing footy for fun among our 14,000 female Auskick players or aiming to emulate AFLW idols, we want to make sure there is a clear development pathway for every player to follow, which will be achieved with the launch of the WAFL Women’s competition.

“Thanks to the financial support of Optus and the West Coast Eagles as our major WAFLW partners, we are excited to commence the first year of the WAFLW in 2019, which will showcase and develop WA’s best female footballers.

“I would also like to thank the West Australian Women’s Football League for the integral role their competition has played to date in the development of female footballers. We are excited to be able to partner with them to bring this new opportunity to life and elevate the top tier of women’s football to a State League competition.”

Optus Head of Marketing Melissa Hopkins said Optus was looking forward to broadening its partnership with the WAFL in 2019 after seeing the competition go from strength to strength.

“We are ecstatic our partnership is extending to include the new WAFL Women’s competition, which is an exciting step for WA Football and Optus,” Ms Hopkins said.

“Footy is an important part of WA communities and we see our partnership as a great way to connect with West Australians through a sport we all love.”

The West Coast Eagles are working towards the entry of its team into the AFLW in 2020 and has been prominent in developing the talent base in Western Australia.

“We have been working closely with the State representative teams and with our own academy squad over the last few years, so our club has had a strong commitment towards developing talent in WA,” Mr O’Connell said.

“We would expect that a number of players from the WAFLW competition will be a part of our inaugural squad so it is logical for us to throw our support behind this competition.

“It is an exciting opportunity and we look forward to assisting the continued evolution of female football in this State.”

The West Coast Eagles brand will adorn the guernseys of each of the competing clubs as well as umpires’ and runners’ uniforms.

WA Women’s Football League President Carolyn Hills said that after forming more than 30 years ago, the WAWFL was excited to witness the evolution of the competition into an exciting new era as WAFLW.

“It is rewarding for everyone involved to see women’s football continuing to receive more interest and support every year. A State League competition aligned with the WAFL clubs will only help us continue this journey and hopefully see more WA players progress into the AFLW,” she said.

“This is definitely positive news for female footy in WA that will help provide a quality State League competition for Fremantle players to return to after the AFLW season,” he said.

“We look forward to working with and providing support to the WAFC and the WAFLW clubs to develop not only Fremantle players but the future generation of AFLW stars.”

“I’m looking forward to seeing how our players perform at their WAFLW clubs and the leadership opportunities they embrace.”

The 2019 Optus WAFLW Premiership Season will be played from May to September at WAFL venues. Fixtures will include double-headers with WAFL League games, as well as stand-alone matches.

Full fixtures will be finalised in the coming weeks, along with plans to live-stream a game each week on the WAFL website.

The overarching competition structure will see the WAFLW replace the League division of the existing WA Women’s Football League, which will continue as a supporting Reserves and under 18 Rogers Cup competition featuring teams from all nine WAFL clubs.

Teams previously playing in the WAWFL League division that did not receive an inaugural WAFL Women’s license will compete in the WAWFL Reserves in 2019.

The WAFC will consider options at the end of the inaugural WAFLW season to expand the number of teams or introduce a promotion and relegation system with the WAWFL Reserves.

The WAFC will administer the WAFLW State League competition, including the provision of umpires and overseeing minimum standards to ensure it is a high-quality, equalised competition that supports the development of WA’s best talent.

The WAFC is also working with WAFL clubs on upgrading facilities for their WAFLW team and has established a fund to support the development of female friendly facilities at WAFL venues.